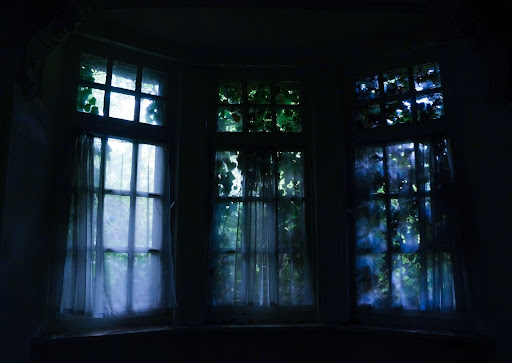 Disclaimer: All the stories told are true and all of them came from students at Horizon High School.

October is known for ghosts and other entities creeping around but many remain skeptic. However, whether you’re a skeptic or not, sometimes it’s hard to deny things that happen before your eyes. And if something has never happened all you can do is listen to stories. Many stories have logical solutions but what about the ones that don’t?

I had gone to an activity held by my church one night in October of 2019. It was about a week from Halloween and you could feel the spookiness in the air. I went with a group of friends. After not too long of being there we had eventually gotten bored with eating so we went to one of the many rooms in the church building. We decided that we were going to film some videos of us just hanging out and having fun.

When we first walked into the room we noticed it was really warm so we decided to open the window. Something to note is the window has a really loud lock and when it opens it is also pretty loud. After we did that we noticed there was another door in the room. This door led to the boiler room but curious we tested the doorknob. It was locked so we moved on.

To film our videos we had moved around some chairs. I wouldn’t mention this except it plays a role later in the story. We also moved the table in the room slightly.

About an hour had passed before we decided it was getting late and we were getting bored. We closed the window and locked it before moving everything else back. My friends then left and I moved to leave when I realized one of the chairs needed to get put back. I quickly put it back and went back to the door. I opened it and turned off the light. As soon as the light was off I heard the clicking of the lock on the window and the window slid open. Thinking I was imagining things I turned around and looked at the window. To my horror the window was open all the way and there was nobody else in the room.

I tried telling myself they were outside except there were a few factors that would have made it impossible. The first was the window unlocks and locks from the inside. The second was that outside the window were really noisy rocks for at least three feet from the window.

I ran from the room and went to get my friends. When we went back the window was still open but one of the chairs was on its side. We checked the door to the boiler room just to make sure and it was locked. Nobody had gone in or out of the room either as I caught up to my friends not too far from the door and we would have seen or heard something. Still to this day I have no idea what opened that window but I’m sure it wasn’t a person.

The Man in the Nightmares

My dad used to live in Lakewood in a house that had a history of domestic abuse. My father was a police officer so he looked into the house to make sure it was nothing serious. He discovered that someone had died in the house in the back corner of the basement. In that corner it was always 10 degrees colder than the rest of the house.

Anway, my step brother and I were about five years old and my sister was about one. My stepbrother and I shared a room and we both talked about these nightmares. His nightmare consisted of people with pig masks that would stare at him under his blanket. My nightmare consisted of elves coming through the chimney and destroying the house. However, the most important thing about these nightmares that everyone in the house had in common was this very tall and skinny black figure that looked like smoke in the form of an eight foot person. We all continuously had these dreams until we left and now many years later my family talks about how scary the situation actually was.

The Woman in the Glass

I don’t remember fully how old I was when this happened but I was old enough to remember it. I have an older sister who likes messing around with spooky things such as Ouiji boards and playing Bloody Mary with her friends.

This will sound like a cliche horror movie but I kid you not the flashlight flickered a couple times and my sister and her friends all started laughing before walking out. I was the last one out and right before I left the bathroom I could have sworn I saw a woman standing behind me. I immediately started crying as it scared me and my sister ended up getting in trouble.

I still live in the house where that happened but nothing happens anymore, or at least that I can see. However there were some nights while I was growing up that I would catch quick glimpses of someone in the mirror but when I would go for a double take they were gone. Sometimes me and my older sister will still talk about it but she doesn’t believe me. To be honest I’m not sure if I still believe it myself but who really knows.

The Man on the Stairs

We had just moved to a new house and we were moving all our stuff into our rooms. I was unpacking a box and found that the rest was all my little brother’s stuff so I walked into his room and as I was walking out I walked past the stairs and saw the figure of a man standing on about the third step from the top. I walked past not realizing and had to do a double-take. When I did though the figure was gone. It didn’t freak me out, but it was just odd. I had thought it was my mind playing tricks on me, but throughout the years of staying in that house doors would close by themselves, and my cat would hiss at walls and look as though someone was near; someone she didn’t like.

Sometimes it’s hard to deny the paranormal when things happen right in front of you. Although sometimes there are things that can’t be unseen and people wish they could go back to the time when they too didn’t believe in ghosts.