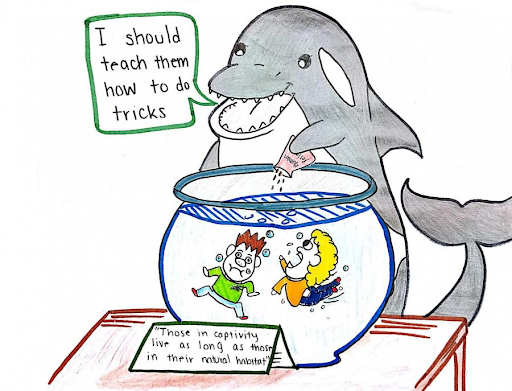 Picture spending your whole life in a bathtub, and getting fed the same food every day, as well as having to perform shows and tricks for an audience multiple times a day. As crazy as this may sound, this is a reality for orcas that are being held in captivity at various Sea Worlds across the U.S. There are a total of three SeaWorld Parks throughout the U.S, including, San Diego California, Orlando Florida, and San Antonio Texas. Keeping these animals in tanks that are nowhere near the space they would have in their natural habitats and sometimes placing them with different species that do not get along, which can lead to fatal injuries to the orcas and the other wildlife.

About 160 orcas have died in captivity (not including stillbirths). The main concern of these orcas being in captivity is the conditions of their health. Studies have shown that nearly half of the orcas examined have shown signs of moderate to extreme tooth decay in their lower jaws. This is due to the chewing of the concrete and steel tank surfaces. To prevent infection to the orca’s teeth they are drilled but often never filled, which may cause the need for antibiotics along with daily flushing of the teeth. Another main health concern is the dorsal fin collapse in males. It is believed that the reason for the collapsed dorsal fin is due to the inability to gain musculature by swimming in a straight line. Orcas that swim in a big open ocean are able to gain this stability, while the small tanks in captivity do not provide them with the capacity to do so. Another main health condition is the reproduction of these orcas. SeaWorld forcefully masturbated Tilikum over and over again and forced female orcas to become impregnated. Female orcas in captivity are impregnated as early as 8 years old, while in the wild the average age of reproduction is 15. Females in captivity are repeatedly impregnated, not allowing a normal time period after giving birth to raising their babies.

There have been many articles produced talking about the orca incidents in that of including humans, but is this due to the natural nature of their species, or is it due to how they have been treated in captivity? Dawn Brancheau was one of SeaWorld’s most experienced trainers who had trained and loved multiple of the orcas. Tilikum was the largest bull orca in captivity. In February of 2010, Tilikum was in a petting session with Dawn, which quickly turned into horror. Tilikum grabbed Dawn by the ponytail and began to drag her into the pool, thrashing her around vigorously. This resulted in Dawn becoming scalped and had almost every bone in her body broken and shortly after drowning, she had been dismembered completely. Her colleagues later stated “We don’t know for sure what motivated Tilikum. But there’s no doubt that he knew exactly what he was doing. He killed her.” This was not the first kill that Tilikum had a part in. He had killed a 20-year-old trainer at Sealand in Victoria, Canada in 1991 before he had been sold to SeaWorld. In 1999, Daniel Dukes, a 27-year-old was found naked displayed on the back of Tilikum; he was covered in bite marks and puncture wounds. There are currently 4 fatalities including orcas who are in captivity, Tilikum has been involved in three of them. Experts had told a documentary in 2013 that they believed “his capture and captivity had rendered the intelligent, sensitive animal psychotic,” SeaWorld later denied these claims. How can we expect to treat these animals so poorly and give them inadequate living conditions, but still expect them to have good behavior to the trainers?

I believe that from all of the various things that these Orcas at SeaWorld have had to go through over the years from the harsh breeding conditions, the small tanks and enclosures, as well as the detrimental effects to the health of these animals. SeaWorld must stop the harsh acts towards these delicate gentle animals.